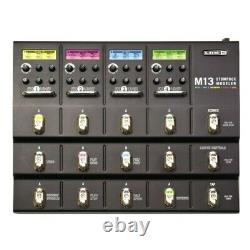 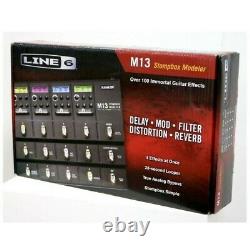 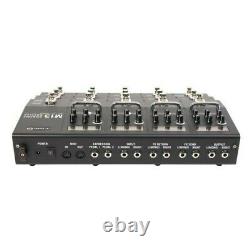 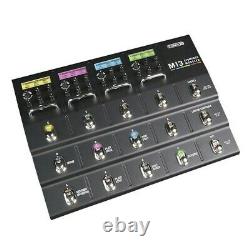 Many of which had only 8-bit resolution. Digital Delay w/ Mod Digital Delay w/ Mod adds a juicy chorus effect to your digital delay. Stereo Delay The secret to the Big L. Solo sound of the'80s! Set one side as a fast echo with many repeats, and the other side as a slow delay with few repeats. Ping Pong Two separate channels of delay. The output of each channel bounces into the other to create the ping pong effect. Dynamic Delay Dynamic Delay features a ducking control to keep the delays from overwhelming what you're playing.

Rather than using tape, the EchoRec used a magnetic platter to record and play back. Echo Platter Dry Thru Your dry signal with Echo Platter repeats. Opto Tremolo Opto Trem is inspired by the optical tremolo circuit that was used in the blackface Fender® amps like the'64 Deluxe Reverb®. Bias Tremolo Bias Trem is inspired by the 1960 Vox® AC-15 Tremolo, which got its pulse by literally varying the bias of the power amp tubes.

Phaser Phaser is inspired by the sound of an MXR® Phase 90 but it's got a few extra parameters to bring you there and back again. Dual Phaser Dual Phaser delivers a big jet sound inspired by a Mu-Tron® Bi-Phase.

Panned Phaser A hypnotizing phaser that slithers from side to side. Inspired by the sound of an Ibanez® Flying Pan, which is a four-stage phase shifter with a panner built in. U-Vibe Inspired by the pulsing push of the now-legendary Uni-Vibe®. One listen to "Machine Gun" and you'll be hooked! Analog Flange Inspired by the classic MXR® Flanger, which was made classic on Van Halen's Fair Warning and Women and Children First.

Jet Flanger Compared to Analog Flange, Jet Flanger is more dramatic with a different wave shape. Inspired by the signature jet-like sweep of an A/DA Flanger. Analog Chorus Inspired by the big and warm tones of a Boss® CE-1 Chorus Ensemble, the original stompbox chorus. Tri Chorus Tri Chorus is inspired by the larger-than-life sound of a Song Bird/DyTronics Tri-Stereo Chorus.

Pitch Vibrato Inspired by the Boss® VB-2, which contained a circuit that produced a bubbly vibrato. This pedal (and this model) feature a "rise time" control that when engaged speeds up to where you last set it. Panner This effect pans back and forth between your left and right channels.

Dimension Inspired by the Roland® Dimension D, one of the first true-stereo chorus units. It's relatively subtle in nature and became an industry standard for double-track effects. Ring Modulator Perfect for those late-night jams when only the weirdest, wildest sounds will do. Barber Pole Phaser A classic effect from the world of modular synths. Depending on how you set it, this phaser either sounds like it's always going up or always down.

Set to stereo you get both! Frequency Shifter Shift frequencies up or down and set the mix to 100% for an otherworldly tone. Or dial it back to add interesting colors to leads.

Script Phase Just add the "brown" sound and you're emulating one of rock's most celebrated guitar tones! Inspired by an MXR® Phase 90. Speed control only, just like the original.

This is a truly original textural effect inspired by a Lightfoot Labs Goatkeeper. Tube Drive A sweet, singing sustain craved by guitarists worldwide. Inspired by the tone of a Chandler Tube Driver. Screamer Inspired by the smooth medium-gain tones of the collectable original, Screamer is based on an Ibanez® Tube Screamer®.

Colordrive Colordrive will transport you back to the breeding ground of British guitar heroes. Inspired by a Colorsound® Overdriver. Buzz Saw Take a deep breath and repeat: I can't get no (duh, duh, duh) Satisfaction. Inspired by a Maestro® Fuzz-Tone®. Facial Fuzz Bottom-heavy distortion inspired by the Arbiter® Fuzz Face®, which is associated with the tones of Jimi Hendrix and Eric Johnson. Jumbo Fuzz Jumbo Fuzz delivers a bright bite reminiscent of the fuzz tones heard all over the first two Led Zeppelin records. Inspired by a Vox® Tone Bender. Fuzz Pi Fuzz Pi delivers plenty of thick distortion and oceans of sustain inspired by the tone of an Electro-Harmonix® Big Muff Pi®. Jet Fuzz Part fuzz/part phaser, Jet Fuzz delivers the best of both.

Inspired by the Roland® Jet Phaser. Line 6 Drive If we could go back to the 60s and be a part of the fuzz revolution, this is what we'd design. Inspired by the Colorsound® Tone Bender.

Line 6 Distortion Completely saturated and over the top, Line 6 Distortion is massive and totally crazy. Sub Octave Fuzz Biting fuzz with an octave below! Inspired by the PAiA Roctave Divider.

Octave Fuzz White-hot fuzz with an octave above! This classic fuzz+octave effect was used by Jimi and other pioneering players. Inspired by the Tycobrahe® Octavia. Boost Comp A punchy boost of gain inspired by an MXR® Micro Amp.

The compressor can add hang time to your sustain and fill out your leads. Volume Pedal Expressive pedal steel-style swells that are ideal for use with a Line 6 EX-1 Expression Pedal. Bass Octaver This effect gives you a single clean note one octave down. Bassists love it but guitarists (including Jeff Beck) are known to bust it out, too.

Inspired by the tone of an EBS OctaBass. Red Comp Red Comp evens out your volume and adds plenty of sustain. Inspired by the MXR® Dyna Comp stompbox compressor. Blue Comp Inspired by the Boss® CS-1 Compression Sustainer (with the treble switch off), Blue Comp delivers warm, percussive qualities that are great for cleaner tones.

Blue Comp Treb Inspired by the Boss® CS-1 Compression Sustainer (with the treble switch on). Kick on this model when you want your leads to really pop! Vetta Comp Adopted from our Vetta II guitar amplifier, Vetta Comp delivers a fixed compression ratio of 2.35:1 with an adjustable threshold and up to 12dB of available gain at the Level knob. Vetta Juice A colorful boost taken from our Vetta II guitar amplifier, Vetta Juice pours out up to 30dB of available gain at the Level knob. Tube Comp Tube-style compression with added low-end warmth inspired by the characteristic color of the Teletronix® LA-2A® compressor, a studio standard. Noise Gate Eliminate the hiss from noisy pickups, or the white noise of extremely high-gain distortions. Graphic EQ A five-band graphic EQ inspired by graphic EQ pedals like the MXR® ten-band graphic equalizer, which was an integral part of Randy Rhoads's live rig. Studio EQ Featuring a constant Q and soft clipping output with level control, Studio EQ is inspired by an API® 550B. Parametric EQ This EQ is complete with a high shelf, a low shelf and a fully parametric band. 4 Band Shift EQ A typical four-band graphic EQ with a twist: the shifter can move the lower bands lower and the higher bands higher. Mid Focus EQ A high-pass and a low-pass each with frequency and gain control used together to create a band-pass. Tron Up Part Auto Wah and part triggered filter, Tron Up delivers a seriously funky vibe. Inspired by the Mu-Tron® III envelope follower. Tron Down Part Auto Wah and part triggered filter, Tron Down delivers a seriously funky vibe. Seeker Up to nine "parked" wah filters set at varying positions and then used in sequence to create a pulsating, hypnotic vibe. Inspired by the Z-Vex Seek Wah. Obi Wah Obi Wah creates sequential changes in tone by emphasizing random frequencies. Inspired by the Oberheim® Voltage Controlled sample-and-hold filter. Voice Box Let your guitar Come Alive with the sound of a classic talk box. Inspired by vocoders, vocal tracts and surgical tubing.

V Tron Your guitar "speaks" with an almost human voice in response to your playing. Inspired by Voice Box and a Mu-Tron® III. Throbber Perfect for a multitude of cool electronica-style sounds and textures, Throbber is inspired by the Electrix® Filter Factory. Spin Cycle This is what headphone mixes were made for!

Imagine two wahs panned left and right working in opposite directions from each other. Inspired by Craig Anderton's Wah/Anti-Wah.

Comet Trails Spooky and otherworldly, Comet Trails provides an enchanting pulse for you to add to your tone. Slow Filter This triggered filter rolls off your high-end with adjustable speeds.

Octisynth Not to be missed, Octisynth provides textures that are equally at home in a mad scientist's laboratory or miles below sea level among its eight-armed namesake. Synth-O-Matic Synth-O-Matic features waveforms from a mouth-watering collection of vintage analog synths.

Let your solos soar with the colorful "honk" that became a signature tone of Mark Knopfler and Brian May. Vetta Wah Our interpretation of the classic wah sound. Connect a Line 6 EX-1 Expression Pedal to take advantage of this effect.

Adopted from our Vetta II guitar amplifier. Fassel Fassel is inspired by a Cry Baby® Super, which is coveted for the mojo of its Fasel inductor. Weeper Inspired by the Arbiter® Cry Baby®, this model is a variation with a different inductor and other component choices. Chrome Inspired by the classic'60s sound of a Vox® V847, Chrome comes complete with the legendary growl of the original.

Chrome Custom Inspired by the sound of a modded Vox® V847 with tweaked gain staging on the first transistor stage, an aftermarket inductor, the Q widened and replaced with a 470k pot. Throaty Inspired by the incredibly musical sweep of a hand-built Real McCoy RMC1, Throaty produces rich mids and a strong low-end. Conductor Inspired by the distinctive sound of a vintage Maestro® Boomerang. Colorful Inspired by the wah section of a Colorsound® Wah/Fuzz.

Smart Harmony Turn that 6-string into a 12-string, rip some'80s dual leads and so much more. This intelligent pitch shifter is inspired by an Eventide® H3000.

Drop some dive bombs and throw some ice picks, a la Tom Morello. Connect an EX-1 Expression Pedal for the full effect. Inspired by a Digitech Whammy®. 63 Spring Perfect for surf guitar tones and spaghetti western soundtracks! Inspired by a 1963 brown spring-reverb head. Lux Spring Reverb Lux Spring Reverb is inspired by studio-standard spring reverbs whose characteristic resonant sounds were created by springs suspended inside a metal box. Vintage Plate Reverb Vintage Plate Reverb is inspired by studio plate reverbs with metallic-sounding resonant qualities. Room Simulates the reflections and other acoustic properties of a classic echo chamber. Chamber A dreamy reverb inspired by an elongated ambient space (like a hallway, stairwell or elevator shaft). Hall A strong reverb tail to simulate the sound of a large open space (like a gymnasium, performance hall or cathedral). Ducking This hall reverb adds a "ducking" effect: the volume of the reverb goes down while you play, and back up when you stop. Octo Creates a lush, ambient space with a harmonized decay that's reminiscent of a pipe organ. Use volume swells and prepare to float on cloud 9!

Cave A surreal and cavernous echo chamber you'll need a helmet light to escape from. Tile Emulates the acoustic properties of a tiled room (like a bathroom or shower) with clear and bright early reflections. Echo Just like it says: echo... This is a lush echo with reverb.

Particle Verb A Line 6 original that turns your chords into a modulated pad. Three modes - Stable, Critical and Hazard - take you from lush and pure to manic and a little insane. The item "BRAND NEW Line 6 M13 Guitar Multi Effects Pedalboard Modeler Pedal FREE SHIPPING" is in sale since Thursday, February 4, 2021. This item is in the category "Musical Instruments & Gear\Guitars & Basses\Parts & Accessories\Effects Pedals\Multi-Effects". The seller is "helloworldjosh" and is located in Traverse City, Michigan.