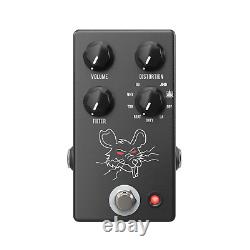 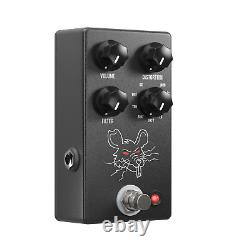 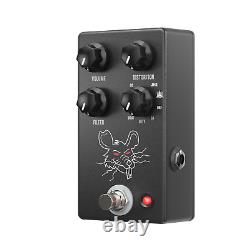 JHS Packrat Distortion and Fuzz Pedal. The Pro Co RAT is one of the most renowned distortion stompboxes ever created, capable of channeling anything from a sweet, subtle overdrive to wooly, crushing fuzz. Since its creation 40+ years ago, loads of companies have tweaked and modded the original RAT circuit, making outstanding developments along the way. This JHS Packrat pedal pays tribute to years of innovation on the RAT, implementing an incredibly versatile multi-mode function that allows users to tap into tons of excellent RAT-style sounds. The JHS Packrat is one of the most impressive distortion pedals we've ever seen.

With its powerful multi-mode function, the Packrat offers nine different recreations of classic RAT distortions. And, thanks to JHS' ultra-advanced digital runway system and fully analog circuits, the reproductions are spot-on, down to the aging of the components one would expect from a decades-old pedal. Since this stompbox has so much going on under the hood, we'll do a quick rundown of the nine different modes offered. Mode 1 replicates the first-ever RAT effect created, the OG V1 RAT.

Mode 2 channels the sounds of the White Face RAT, most notable for its reverse Filter control that replaced the Tone knob. Mode 3 emulates the Turbo V5 RAT, the first distortion effect to use LEDs in the clipping section, adding extra power and aggression.

Mode 4, perhaps the most unique mode, recreates the sounds of the exclusive'budget RAT' stompbox, known for its surprisingly robust tone. Mode 5 pays homage to the Dirty V7 RAT, the first to feature germanium diodes instead of silicon, giving it extra dirt and grind. Mode 6 is modeled after the LA Metal pedal, a Japanese effect that implemented the original RAT circuit in the'80s and cleverly disguised it as an'all-new' circuit.

Mode 7 harnesses the boutique sounds of the MO'D pedal, one of the most praised RAT-style distortions ever created. Mode 8 reproduces Caroline Guitar Company's Wave Canon, a more modern attempt at improving the classic RAT circuit. Mode 9, the final mode, is the very special JHS Mode, and it pays homage to the discontinued'PackRAT' modification that JHS founder Joshua Heath Scott did to RATs for 10+ years.

Boasting a wide array of stellar, time-honored RAT-style effects, the JHS Packrat is the distortion pedal of choice for guitarists who demand nothing but the best in versatility and performance. Specs Power Requirement: 9V Length: 4.8" Width: 2.6" Height: 1.6 SKU: PACKRAT. This item is in the category "Musical Instruments & Gear\Guitars & Basses\Parts & Accessories\Effects Pedals\Distortion & Overdrive". The seller is "creamcitymusic" and is located in this country: US.