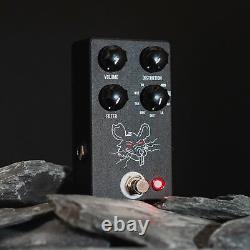 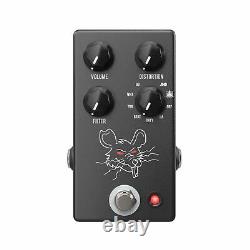 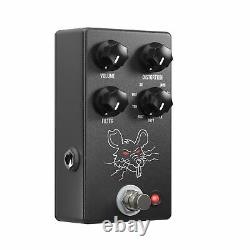 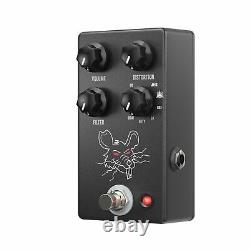 Scott Burnham and Steve Kiraly first had the idea after playing, repairing and modifying all the available distortion pedals on the market. They wanted something that didn't exist in the then mainstream throes of MXR, DOD and even BOSS's product line; they wanted a pedal that could go from overdrive to distortion and then all the way to fuzz.

By 1979 Scott had perfected the circuit in his RAT-infested basement workshop, and the rest is history. The PackRat is the ultimate tribute to the 40+ years of rodent evolution and its impact on the guitar's sound.

Artists from every genre have used the iconic tones in this unassuming black box to create their sounds, including Nirvana, John Schofield, Pink Floyd, Metallica, REM, the Eagles, Jeff Beck and Radiohead. Building on our Multi-Mode pedal series that includes the Muffuletta and Bonsai, the PackRat uses the same unique digital runway system to direct the paths of 261 components through 40 individual switches. This means that when you choose one of the nine legendary or rare modes, you are playing fully analog circuits that perfectly replicate that mode, even down to the aging components (also known as component drift). The OG is a perfect recreation of the first production Version 1 Big Box/tone control RATs ever made.

This is the model that started it all. The "White Face" is the first Small Box RAT and is recognizable for its white filled block logo across the top of the pedal. This model has the more traditional reverse Filter control instead of Tone. The Turbo RAT introduced the world to a different type of distortion by introducing LEDs to the RAT's clipping section to produce a more powerful distortion sound.

In the late nineties, Guitar Center launched an exclusive "budget RAT" with big tone and some unique modifications. The BRAT is the most unique RAT variation ever made by ProCo. What happens when you replace the stock silicon diodes with germanium? Japanese pedal companies loved the RAT circuit and used it throughout the 1980s disguised as their latest and greatest "original" circuit.

The LA Metal is one of the most interesting takes on the circuit from this era. Swirl paint jobs and point-to-point wiring made Landgraff a father of the nineties boutique era. The MO'D distortion is one of the greatest RAT-style distortions ever made. When I started the PackRat, I knew immediately what friend I was going to invite to the party. The Wave Canon is Caroline Guitar Company's stab at making this classic circuit even better. I bought the version 1 back in 2012 and immediately fell in love. The JHS Mode is the discontinued "PackRAT" modification that I did to RATs for over ten years. It takes everything I love about this circuit and elevates it! This item is in the category "Musical Instruments & Gear\Guitars & Basses\Parts & Accessories\Effects Pedals\Distortion & Overdrive". The seller is "thesoundparcel" and is located in this country: US. This item can be shipped to United States, Canada, United Kingdom, Germany, Japan, France, Australia.