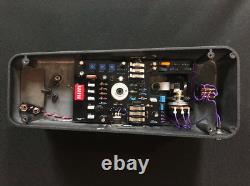 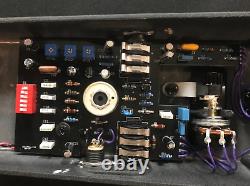 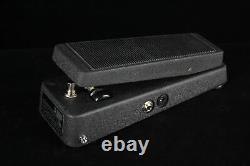 The core circuit of the Rippah Wah is based around the vintage Maestero Boomerang wah. Take an already killer wah circuit and add the ability to adjust every parameter to your specific tastes without having to worry about marking knobs or kicking them while playing in a live situation.

In other words you can "set it and forget it"! Inside each Rippah Wah you will find three blue trimmers or "trim pots" using a small Flathead or Phillips screwdriver the user has the ability to tune three different parameters of the wah. Growl - Controls the amount of bass and gain or growl in the circuit. Turning this will remove bass and gain for a smoother funky feel.

Comes set to the maximum setting as this is the stock setting of the pedal. Sweep - This controls the range of the sweep or depth. By turning this you can broaden the spectrum and add more throat or you can thin it. Out if you like to play with the upper and mid-range frequencies.

Boost - When using the Growl control this can also cause a bit of a volume drop at more extreme settings. The Rippah Wah also contains a. Boost circuit that is capable of overdriving the front end of just about any clean tube amp. The Boost control was incorporated to allow the. User to overcome any loss of volume that may occur at these settings.

This control also allows you to set the wah above unity gain so you. Can cut through the mix in live situations. I prefer using this with an already overdriven amp as it can give your amp a kick in the ass and. The Boost control was not incorporated to overdrive a clean amp and I suggest that you do not use it in that manner. There is also a six position DIP switch on the main board.

This allows the user to adjust the "Q" position of the wah. The Rippah comes set to a stock setting with position one on. The other positions allow very subtle adjustments to very drastic adjustments. I encourage you to play around with these as you will eventually find that wah sound that lives in your head. There are literally hundreds of combinations and you should be able to dial in just about any inductor based wah tone out of this pedal.

The pedal also features a fuzz friendly output buffer that allows your wah to work seamlessly with most fuzz and overdrive pedals. This allows the wah to deal with the higher input impedance of these types of pedals. The Rippah Wah is powered by a high quality 9VDC battery or regulated 9VDC 2.1mm center negative power supply.

Thanks for looking - Kevin. This item is in the category "Musical Instruments & Gear\Guitars & Basses\Parts & Accessories\Effects Pedals\Wah & Volume". The seller is "wilsoneffectsllc" and is located in this country: US. This item can be shipped worldwide.